Hey Eco citizens, we’ve been heads-down working on getting Eco 9.0 ready and it’s getting close, REAL close, date to be announced soon! Don't miss todays stream at 2pm PST / 23:00 CEST (in about two hours from the time of publishing this blog). One of the main focuses of this update is the government system. 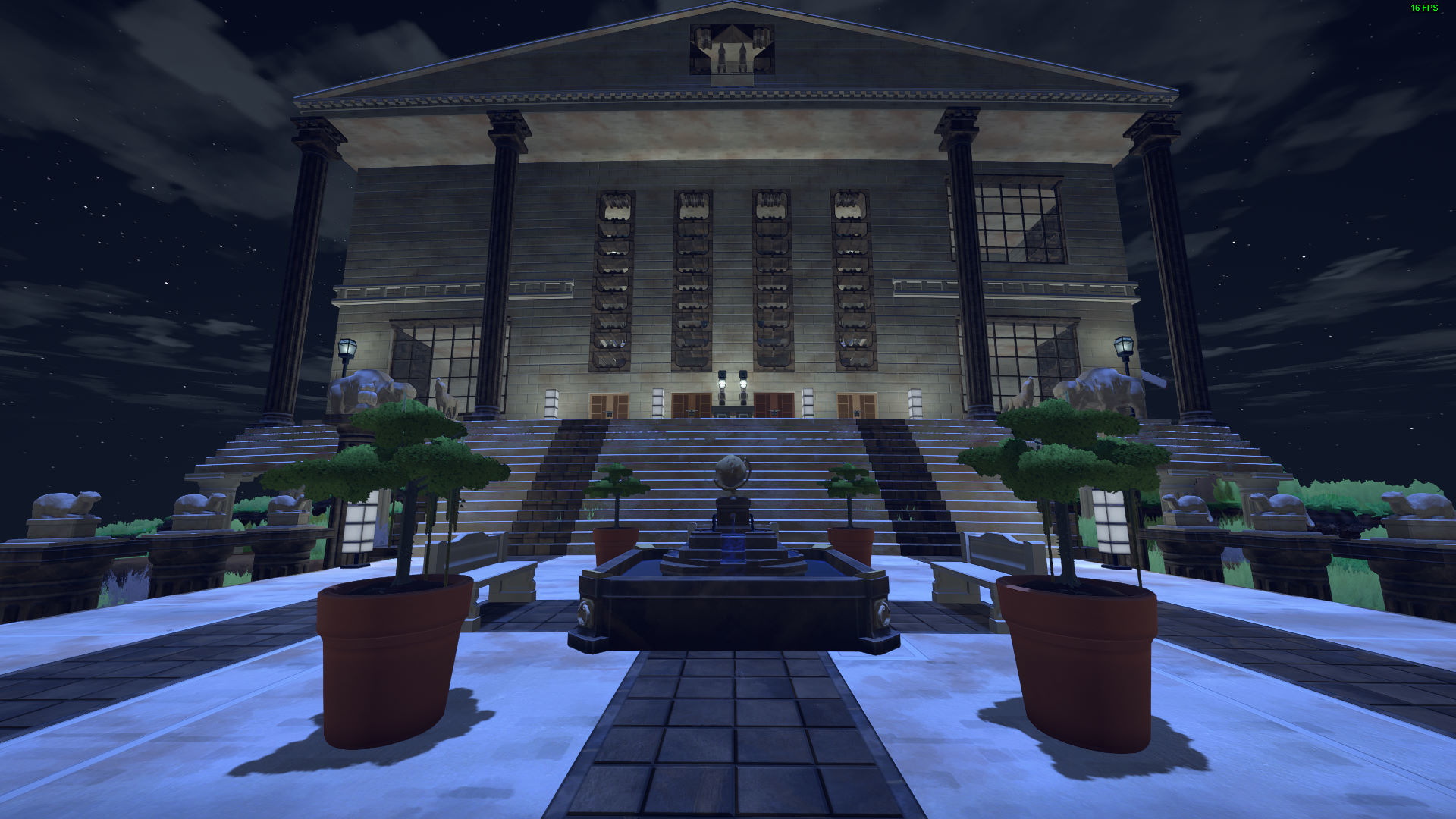 So to start the hype train up for 9.0 (choo-choo) we’re starting a series of blogs and streams, launched each week on Friday. We have a LOT to share, here’s the tentative blog and demo schedule:
We’ll be releasing Eco 9 somewhere in this lineup, and then keep going. So start us off, here’s the details on one of the cornerstones of the new update, the Constitution.

Eco 9: Constitution
Prior to Eco 9, the government was a fill-in-the-blanks affair, you can create very custom laws of course, but the workings of the government – how elections are held, what powers leaders have, how decisions are made – was largely hard-coded. No longer with Eco 9. To start a new government, you’ll need to build a Capitol: 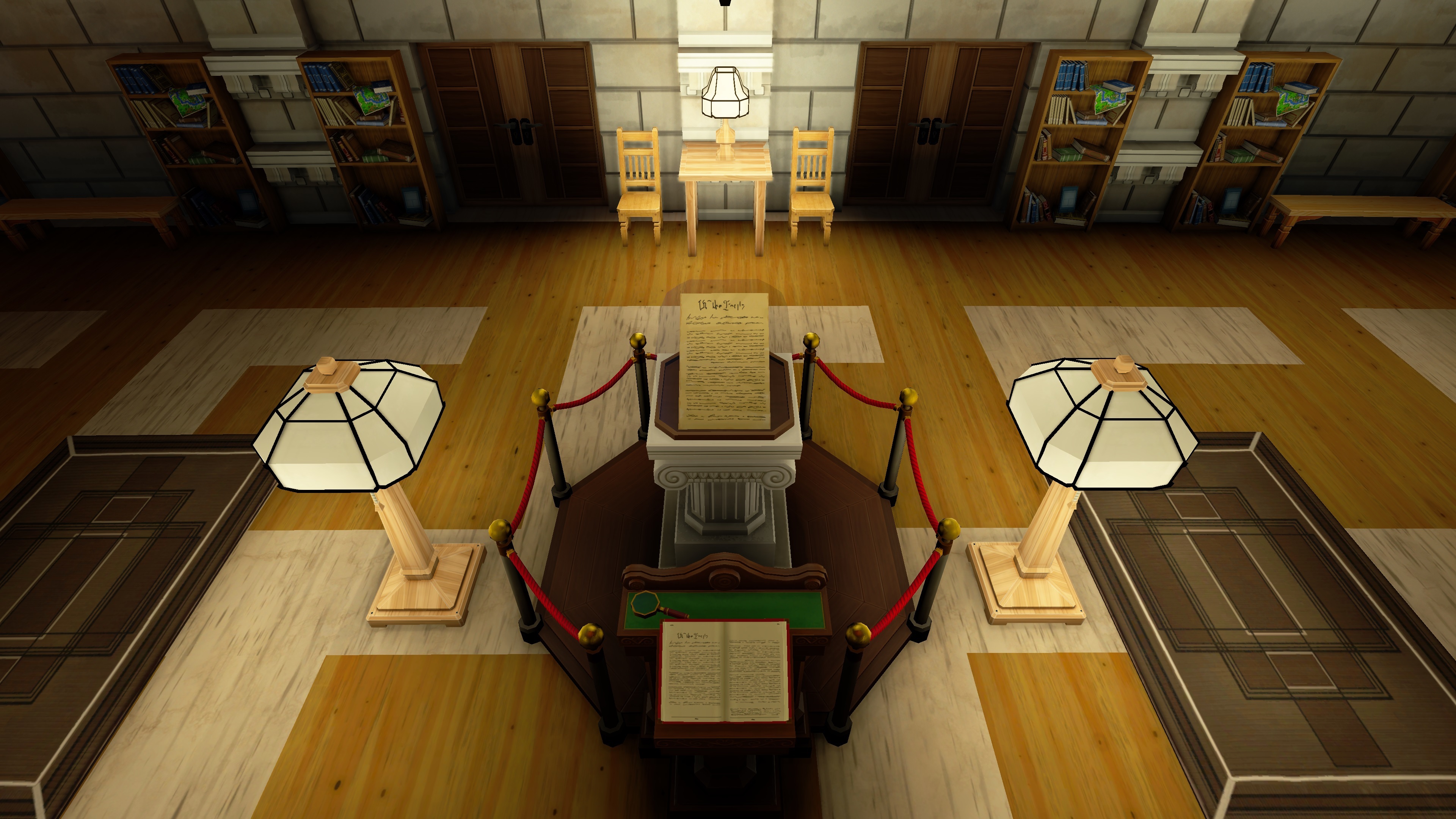 By opening up this object you’ll get access to a Constitution: 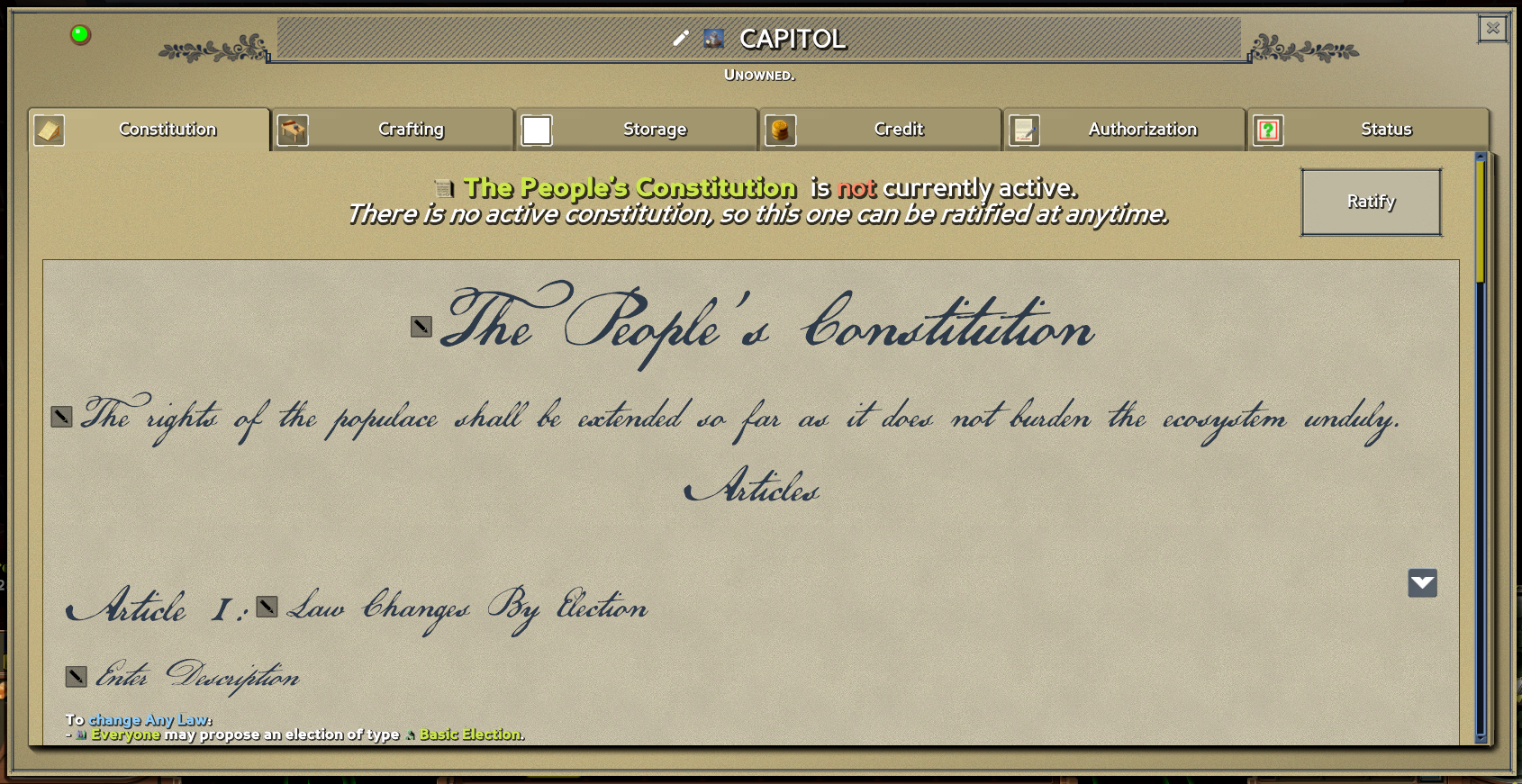 In Eco 9, there is no government until a constitution is ratified – this is the first piece that must be created for a government to exist, and it defines how the government will work. So players will not only run their own government, but design it as well.

How does that work? Through the addition of Civic Articles.

A Constitution in Eco is basically a list of Civic Articles, and each Article designates how something works in the government. In the example above, this Civic Article defines how laws are created. Row by row, you can see the settings that can be configured. First, what it applies to (laws), then what types of laws, which can be several options:

You can also set the specific actions which are regulated by this civic article, if you want to get really detailed: 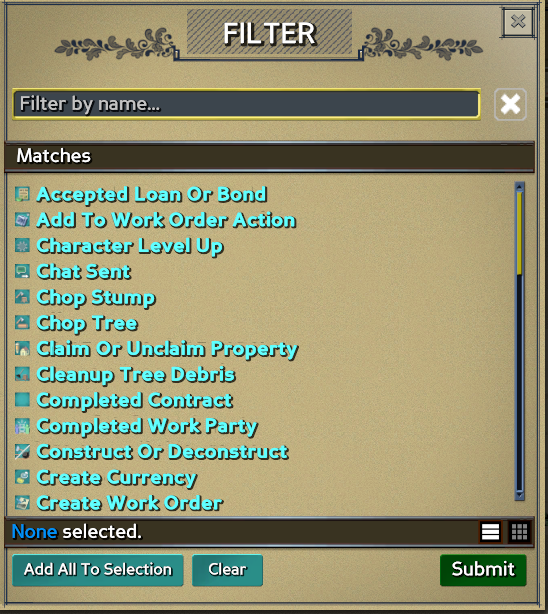 The bottom three settings, Executors, Proposers, and Election Process, determine how the law is created or changed. Stay tuned for a future blog on how election processes work, but basically they allow you to define all the specifics about how an election works, and you can have many different types of elections in a single world.

So in this example above, laws are either created by me by fiat, or through a Basic Election which can be proposed by Everyone. That ‘Everyone’ tag is an expanded Demographic feature and can be defined by citizens as well. There’s a few that come with every world for convenience. This lets you divided up the populace in various useful ways and use it for anything government related, from Constitutions to laws to taxes and more. I’ll post more on that in a future update. 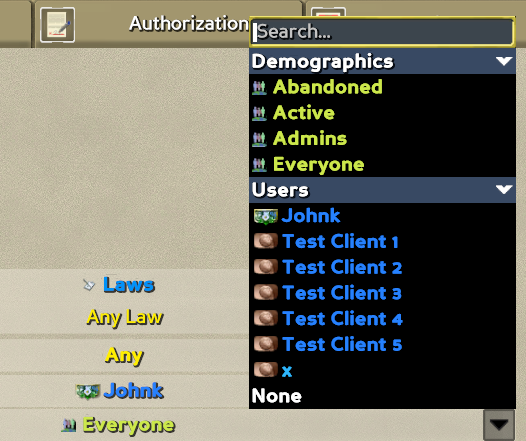 So that’s a single Civic Article, but a typical Constitution will have 8-10, designating powers for all the different government features. So as not to overwhelm, we create a default set of these that work pretty well, with everything requiring elections, and let the founding citizens customize it. Here’s a zoomed out look at a few more default articles: 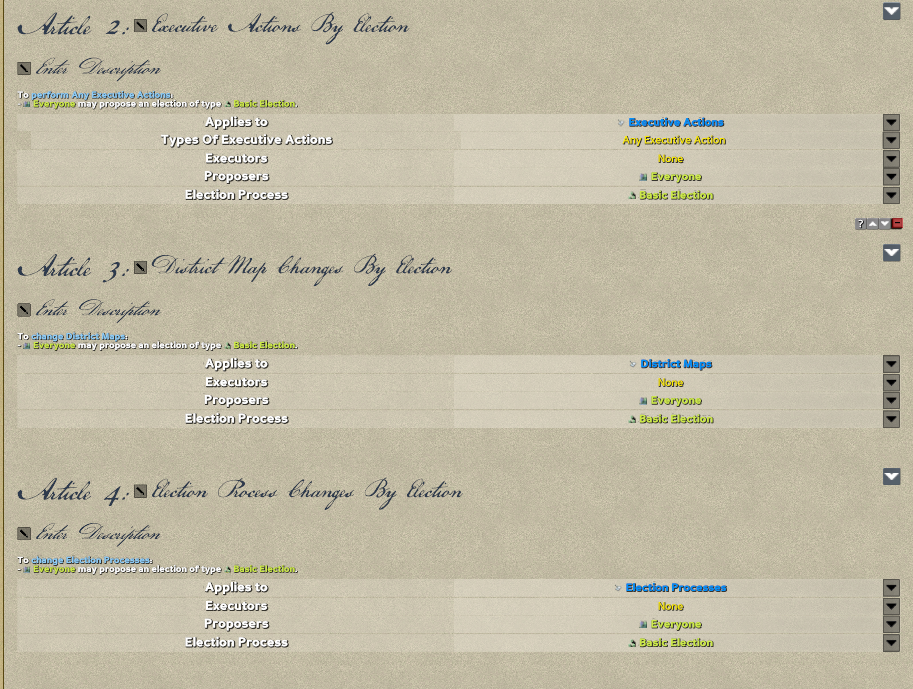 I’ll go into how these other government features work in a future update, but I do want to explain how one special civic object works, Amendments. These are created on a separate Amendments object, and represent Civic Articles added after the Constitution is created, allowing citizens to make changes to the government as needed.

Once a Constitution is ratified, you can no longer edit it, thus to make changes you must create amendments. An amendment is just like a civic article, but it can specify existing articles to replace. Say, for example, I went mad with power to enact any law I wanted, and that power needed to be removed. Citizens could create an amendment like so (ignore the in-progress UI art, still finishing that):

This amendment removes the existing Law Changes By Election article I showed above, and replaces it with one that has no executors, meaning the only way to make a change at all is by a Basic Election, and changes proposers from Everyone to Active, which is a subset of players who play frequently. This amendment can then be put forth in an election, and if it passes, it will replace the old one, which will then look like so on the Constitution:

It's still in the Constitution, just crossed out and no longer has an effect! If something were to happen to the amendment, however, say it was repealed, then this civic article would come back into effect. Using these tools, citizens have the ability to change their government to better suit a changing society. Anticipating all the challenges a population will face in the future is a monumentally hard task, and citizens that allow for changes to their original decisions, and a defined-process for how to make them, will have a lot more flexibility in adapting and changing the government to suit the current needs.

Of course, it comes with dangers as well: a populace can make ill-advised changes that can create terrible circumstances as well. Designing the government to both stay powerful over the tests of time while also being flexible enough to changing needs will be a major challenge. Much debate should ensue as citizens design their initial governments.

Ratification
Lastly, a tour about Ratification. In order to take effect, a constitution must be ratified, that is, it will be put to vote in a Basic Election. It will not take effect until this election has successfully passed, meaning the constitution must reflect the will of a majority of the people to start. From then on, the Constitution will remain in effect, as long as the building that holds it stands and remains a valid room.

However, there is a safety mechanism to a rule of law that no longer serves the people: citizens can organize to overthrow the government. This is accomplished by building a second capitol which is grander than the first – meaning, it has a higher room value by 50%. The Constitution in this second capitol will then show if it can overthrow the existing one:

Government Beginnings
Building a constitution sets the rules for how your growing society will function, and designing the inner-workings can lead to incredibly different styles of government. Over the coming weeks, we’ll give examples of those different kinds of government, and all the parts that can go into creating a diverse set of rules to suit the people’s needs.

This has been something I’ve been excited to get into Eco from the beginnings, and forms a key part of the philosophy of the game, which is that the government is one with the people, they create it, they run it, they are it, and they have no one to blame but themselves if it becomes malignant. By allowing the government to be essentially programmed by its citizens, Eco provides a super valuable tool, and creates an event that, within the context of the game, is historic: the formation of the government. In a world that you invest in, care about, and hope to save, that can be an incredibly powerful moment, and the thoughtful discussions, plans, and forethought among players that goes into that is what Eco is all about.

Stay tuned for more, and follow us on Twitch, YouTube, or Facebook to see the streams I’ll do along with these blogs, where you can ask questions too. Can’t wait to see the governments people design and run with this system when we launch Eco 9.

Click here for the source of this article RSS Feed